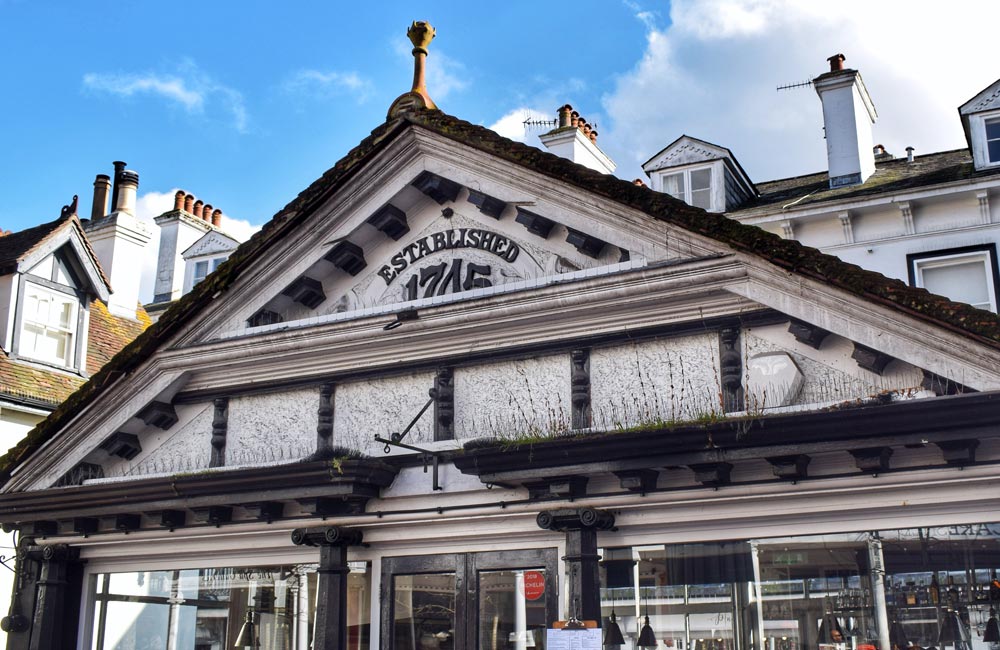 In 2013, we opened our Old Fishmarket Champagne and seafood bar in Tunbridge Wells’ historic Pantiles. A site already steeped in maritime history, it was the perfect location for Matthew Sankey and his father Guy to introduce a new dining concept to their brand, and add something completely different and utterly unique to the town’s food and drink scene.

“It was something that both my father and I wanted to do,” says Matthew. “The inspiration came from places like Wheelers Oyster Bar in Whitstable, as well as Wright Brothers in London and Riddle & Finns in Brighton, but we wanted to create a more upmarket version for Tunbridge Wells. It’s quite a traditional setup for an oyster bar.”

With an open kitchen at the heart of the action, the Grade II-listed building was transformed into a beautiful 22-cover restaurant, complete with high seating for a fully immersive vantage point of the seafood, cooked right before our customers’ eyes. Indeed, the distinction between an ‘oyster’ and a ‘seafood’ bar is a crucial one.

“We call it a seafood bar, because we don’t just sell oysters,” Matthew explains. “Our bestseller is lobster, and the whole emphasis of the restaurant is that it’s high-quality food and incredible service, where you get to watch the chefs cooking.”

Today, the OFM team includes head chef Caleb and senior sous chef Mo behind the stove, while general manager Alex oversees front of house. But that’s just the thing about the Old Fishmarket: By removing the barrier between kitchen and restaurant, every detail must be impeccable, delivering consistently high standards across the board.

“Chefs want to work here, but a lot of them aren’t used to being customer-facing,” continues Matthew. “We knew it was a brave thing to do and something totally different, so the main challenge was being able to recruit the right staff – but that turned out to be the easiest part of the process.”

Long before we took over, however, fish and seafood already flowed through the pages of The Old Fishmarket’s story. The eponymous market originally referred to the entire open space in which the current building now sits, which appeared on the 1739 Bowra survey – the earliest Tunbridge Wells map – and where fish and poultry merchants would set up temporary stalls to sell their wares.

“Although the current building is claimed to date from 1745, it was largely or entirely rebuilt in 1895 to the designs of local architect William Barnsley Hughes,” historian Ian Beavis reveals. “So, it’s debatable whether there’s anything left in the current building that’s actually Georgian, but it remained a fishmonger until the 1940s, when it became an antiques shop.”

The Pantiles itself has certainly come a long way since then. Under the ownership and management of property developer Targetfollow, it stands as a thriving, communal beacon of great restaurants, cafés, pubs, bars and shops. In addition to the support of Tunbridge Wells Borough Council in converting the listed property, the area is likewise a communal haven of likeminded fellow traders.

“The Pantiles has really come alive and become such a destination, and I like to think we were quite a big part of that by taking our brand down there,” considers Matthew. “There are so many independents, all of whom understand that it’s better to work together than against each other. There’s a nice understanding that we all do something different and don’t step on each other’s toes, which works well.”

Adds Paul Burnett, associate director at Targetfollow: “Sankey’s has been a fantastic addition to what is a prime eating area and venue for live entertainment, within a premier boutique shopping destination in Tunbridge Wells. Retailers, restaurateurs and residents have chosen The Pantiles over the years because of its character and reputation as a vibrant place to shop, eat, live and be entertained.”

That same character and reputation is something we value dearly and take very seriously at Sankey’s. We’re always looking to improve our offering and diversify what we do at the restaurant, ensuring that it retains its rich and wonderful history, while also taking it forward as the household dining destination that locals and visitors alike know and love.

“One thing I’ve learned is to do things slowly,” Matthew concludes. “It’s worked out even better than I could have imagined, and the job now is to keep improving and developing. We’re constantly evolving what we’re doing every day, and always looking at menus, wine parings and doing more event nights. The aim of the game is to get better and better, and this year’s project is to continue doing just that.”

To book your table at The Old Fishmarket, click here.

Newsletter
sign up
be the first to know when we launch news, offers and events
thank you! your submission has been received!
Oops! Something went wrong while submitting the form.
By filling out this form, you agree with our privacy policy
related
you might like
Restaurants
A chef's life at Sankey's
Restaurants
Making history at The Old Fishmarket seafood bar
view all articles