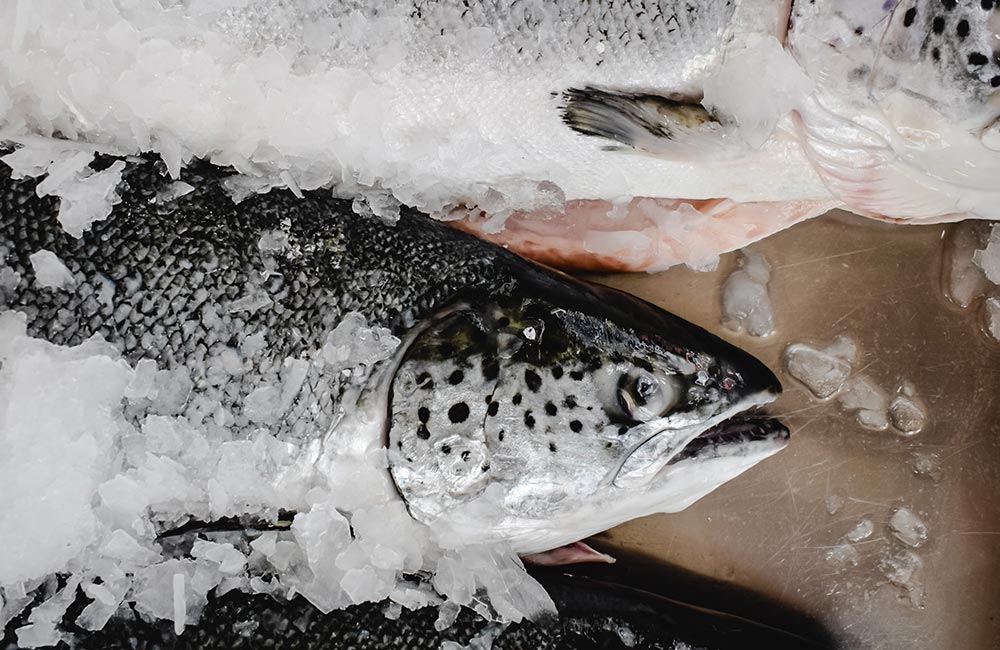 For both our restaurants and retailers, two thirds of the seafood we work with comes from one of the world’s most iconic fish markets: Located in East London’s Poplar district, Billingsgate is the UK’s largest inland fish market, and has been intrinsically linked to Sankey’s fishmonger Graeme Anderson for more than three decades.

“I first went to Billingsgate when I was eight years old,” he says. “My father had a haulage business, so used to take fish – mainly salmon from Scotland – all over Europe. One of his delivery drops was Billingsgate, and I vividly remember the first day I went there with him, because a forklift truck crashed into the back of his new lorry!”

From that fateful day onwards, Graeme was hooked by the sights, sounds and smells of the market’s vibrant traders, stalls and produce. Having grown up in a small town on the shores of Scotland’s beautiful Loch Fyne, his career has taken him from a Glaswegian fish shop to some of London’s top wholesalers, before joining Sankey’s in 2009 – and Billingsgate has been there every step of the way.

“When I started working in London, that was the first time I ever went to Billingsgate as a buyer,” he recalls. “I’ve always had a relationship with the market one way or another, so everyone knows me there, and I’ve built good relationships with the traders over the years. That’s the great thing about it: We do so well at Sankey’s because we know who to go to in order to get the best.”

Spanning a whopping 13 acres, the entirely self-contained market sells an average of 25,000 tonnes of seafood products each year. With a ground floor dedicated to an expansive trading hall of 98 stands and 30 shops – including two cafés – Billingsgate also boasts an abundance of individual cold rooms, as well as a 1,500-tonne freezer store, an icemaking plant, and 14 lock-up shops.

The numbers speak for themselves, but stepping foot inside is an experience all its own. With stalls sprawled out as far as the eye can see, this space is a well-oiled machine; as purveyors sell their wares, porters dart hither and thither with trollies full of fish, making their way either to or from the packed carpark outside, the unmistakable aroma of fresh fish permeating the air all the while.

Business hours begin at midnight here, with palettes upon palettes of the day’s catches arriving in enormous arctic trucks, all the way until 4am. It’s a bustling ball of energy, and a distinctly nocturnal way of life; one of long, antisocial hours and altered body clocks, but also a hive of activity, electricity and camaraderie that can only be generated before the rest of the world has woken up.

For Graeme, it’s common to be there by 3.30, just as the fish begins to roll out to the floor’s traders. Orders will have already been phoned through even earlier, meaning our fishmonger can collect, load up, and be back in Tunbridge Wells by no later than six o’clock. From there, it’s on to the day’s work ahead, as we unload, prep, and sell to our own trade and retail customers.

While Billingsgate is still London’s premier destination for wholesale merchants, it’s also seen its fair share of developments since its 17th-century origins, reflecting the capital’s ever-changing cultural landscape. In 1982, the market was relocated from its original Billingsgate ward in the City of London, to its current site at Poplar’s Isle of Dogs, while also witnessing an influx of foreign interest.

“There are traders and a lot of father-son businesses that have been there for 50 years or more,” explains Graeme. “These days, there are a lot more nationalities running stands, so it’s much more multicultural than it used to be. There’s a big Asian market and a lot of Chinese-owned stalls, with around 50% now English-owned, so it’s definitely gone through changes.”

“Billingsgate gave regional producers a central market from which to come and sell,” adds Guy Sankey. “When I started out in the late 1960s, it was a great USP, because it meant that I could offer a much wider range of fish. I used to go there two or three times a week to buy anything strange and interesting, and got to know the dealers very well. It’s a focus point for the UK’s fishing industry, and one of Britain’s most important markets – there’s nowhere else like it.”

Today, the uncertainty of Brexit, coupled with smaller fishmongers having to go straight to source in order to remain competitive, has meant that the future fortunes of Billingsgate remain somewhat unpredictable.

With plans to merge the market with Smithfield and New Spitalfields in a new complex in Dagenham by late 2020, the next chapter of this historic site could well be on its way. But whatever happens, for people like Graeme, Billingsgate will always be a second home and a part of our history, holding a particularly special place in our hearts.

“What makes Billingsgate so iconic is its character,” Graeme concludes. “You get every walk of life, and there’s nowhere else where you’ll find a few thousand people – all from different backgrounds and nationalities – congregated together in one place, in the middle of the night. You see it all in Billingsgate; the personalities are second to none, and you always know you’re going to get the best.”