A chef's life at Sankey's 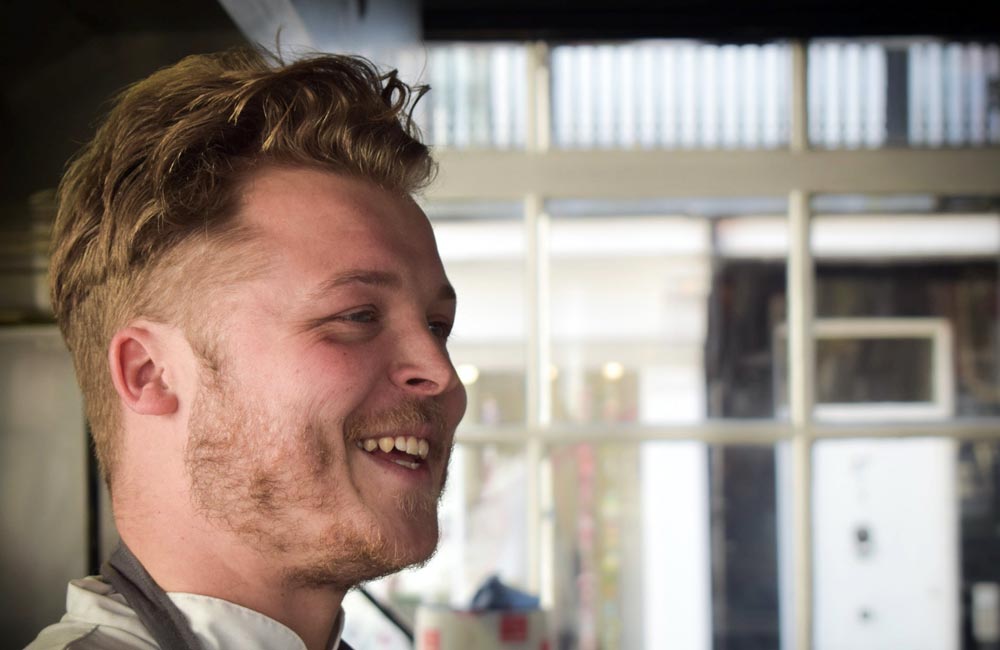 For Tunbridge Wells diners, our two sites are both go-to seafood destinations locally, each with its own distinct style to choose from. At Mount Ephraim’s Seafood Kitchen & Bar, pub classics are given a Sankey’s twist under head chef Simon Wilson, while down on The Pantiles, The Old Fishmarket’s more refined experience is overseen by head chef Caleb Hingley.

In their respective kitchens, these talented cooks put their unique stamps on our menus. From the former’s popular po’ boys and paella, to the latter’s renowned oysters and assorted platters, Simon and Caleb specialise in a wide range of ‘fruits de mer’, ensuring that every dish is plated to perfection.

“Sankey’s has such a great product in its food offering,” says Simon, who originally came aboard in 2005. “There have been lots of changes over the years, but we’ve always done very well with our fish and seafood, and it’s very much still seen as a food-led business.”

“As a chef, you always want to work in the best places, with the freshest ingredients,” Caleb adds. “For seafood restaurants in and around Tunbridge Wells, there’s nowhere better than Sankey’s.”

With its Grade II-listed setting and open kitchen design, The Old Fishmarket was a new and exciting venture for Caleb, who joined as sous chef in 2015. In a customer-facing role, he jumped at the chance to interact with and cook in front of his guests – a big step for anyone used to working in a more traditional back-of-house set-up.

“Going into an open kitchen, where customers are watching you cook all day, you have to be presentable, and everything has to look the part,” he explains. “It’s a completely different environment, but I enjoy talking to customers, which is something you don’t get to do in other kitchens. It’s good to have that element, as it changes it up and makes it a more fun, enjoyable job.”

For Simon, the quality of the produce has always been a big draw. Whether it comes in from London’s Billingsgate Market or direct from the coast, he takes great pride in working with the finest fish money can buy.

“When I first started, I had a lot of guidance from Guy Sankey in preparing and cooking seafood,” he reveals. “The crab salad we do at Mount Ephraim is such a great dish to make, as are our Thai crab, mussels and oysters. Everything’s always fresh, and customers appreciate what’s on the plate so much more these days, as their culinary knowledge is a lot higher than it used to be.”

Both Simon and Caleb have certainly recognised and adapted to changing trends in their industry over the years. With the rise of celebrity chefs, TV cooking and social media, they’ve witnessed a shift in how their profession presents itself as the face of the hospitality sector.

“It’s important to be proud of your work,” considers Caleb. “Being a chef is a hard career, so you have to take pride in what you do, as that’s part of the drive to continue doing it. Most restaurants are designed with the focus on front of house and the delivery of the food, rather than the time and effort that goes into making it, so it’s nice that chefs are now being acknowledged just as much.”

Likewise, an ever-changing approach to the way people dine has led to a more intimate interaction with foodies recently. With just 20 covers, The Old Fishmarket has pulled back the curtain, and turned the front and back-of-house divide on its head, offering patrons a glimpse behind the scenes whenever they visit, and blurring the lines between kitchen and restaurant.

“Dining nowadays isn’t just about the food; it’s the experience from the minute you enter, to the moment you leave,” Caleb insists. “It’s how you’re greeted, treated and spoken to, and those little touches that make it an experience, so it’s important not to lose your touch.”

Of course, cheffing comes with its fair share of challenges. In a time when staffing shortages are all too commonplace, it’s becoming increasingly difficult to recruit, let alone retain, young people who are looking to pursue a career in professional catering.

“It’s not how it was, say, 10 years ago, as it’s very hard to find chefs now,” reflects Simon. “It’s easier to find more senior-level chefs, but still a struggle across the board. It’s always been a very hard and unsociable job, but you get a lot out of it when you’re in it. There’s definitely a feeling of family between chefs and people in the hospitality industry.”

Agrees Caleb: “It’s an undesirable career, and tough to find people who want to do it long-term. It involves a lot of sacrifice, so I understand why there’s a shortage, but the hard work pays off. You’re not judged by background, age, creed or education – it’s all about how hard you work, and how much you’re willing to put in, as long as you listen, learn, and earn people’s respect.”

With the potential to host more special events and interactive dinners, Caleb is excited for what’s to come at The Old Fishmarket, whereas Simon is looking forward to shaking things up and experimenting more with the Seafood Kitchen & Bar’s menu. The world’s most definitely these two chefs’ oyster, for whom cooking at Sankey’s is far more than just a job – it’s a vocation and a calling.

“Chefs are interesting creatures,” Caleb concludes. “I’ve seen some really talented cooks who didn’t want to commit to the hours or put the hard work in, so didn’t make anything of themselves when they could have. But chefs are noticed more these days, and it’s nice to be rewarded when customers take an interest and say, ‘Thank you’, as it gives you more drive to do well.

“It’s important to branch out, and try and do things you’ve not done before. People are curious about things they’ve never eaten, which creates a dialogue between you and the customer. It gives you something to talk about, and the job that extra element, where you get to educate people about food they may not have tried, and encourage them to experience something new.”

Newsletter
sign up
be the first to know when we launch news, offers and events
thank you! your submission has been received!
Oops! Something went wrong while submitting the form.
By filling out this form, you agree with our privacy policy
related
you might like
Restaurants
A chef's life at Sankey's
Restaurants
Making history at The Old Fishmarket seafood bar
view all articles